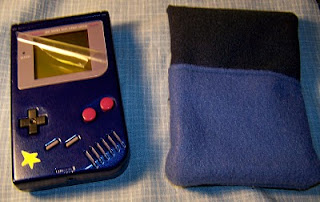 I finished my first gameboy refurbishing project! About a month ago! I didn't post any "in-process" pictures because it was for my sister. It is a Little Prince themed Gameboy, and is made from parts of two broken gameboys I bought off ebay. There were some lines of missing pixels on the LCD screen, so I opened it up and used a soldering iron to reheat the strip on the bottom of the screen, which fixed it. Then I took all the parts out, and washed the shell/case and buttons. Used one of those computer keyboard dust cans to clean out the circuit boards, and a q-tip with isopropyl alchohol on some of the metal parts to clean those.

The paint job was a little tricky. This was my first time painting a gameboy and I learned some things. Number one. You don't need to sand them unless there are little gouges or scratches. The paint will stick just fine. I put two layer of white primer spray paint on, and then some yellow (bad idea). After the yellow had dried, I cut out little stars and put them on in a couple places, and then sprayed the whole thing glitter dark blue. The blue looks awesome, but I should have stenciled the stars on after that coat, it would have looked a lot neater. Next time, I will know this. So, Brigid was really nice and hand painted the stars after, and I popped a new screen protector on, giving it a very crisp, and brand new feel. 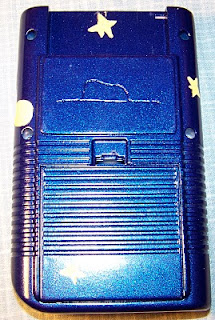 I also made a travel bag for it made out of several small pieces of felt. My Mom helped me sew it with the sewing machine. She sewed it for me is probably a more accurate way to describe it. Anyway, I finished it, bundled it up with Tetris, and wrapped it up for my sister for Christmas. She liked it. I've got some more ideas for my next gameboys, but those will have to wait until after the RPM Challenge I think.

Oh yeah, I almost forgot.  I also glued a piece of a cd case cut into a rectangle on the back.  This had two purposes.  The first was to cover up a bunch of text on the back that I think is ugly.  The other, more important reason is that I wanted to have a personalized mark on it, so my sister knows it is hers.  It is a picture of a cowboy hat.  Are you scared of it?
Posted by Unknown at 4:34 PM

Snazzy would be the understatement of the 00's.